Art is all around us

The mesmerizing sonnet, the enchanting sonata, the beautiful painting, the intricate embroidery, the gigantic sculptures, art is all around us! Art is something as old as the human history and is there in everything we see around. The style of the shoes, someone’s hat, the look of a car and the towering buildings are all designed by someone who could think of it. All of this has happened on a paper, canvass or a digital screen. This is where the children learn how to read and write.

In the previous centuries, before the industrial revolution happened, there was some part of art involved in every family. What was essential for survival and called resourcefulness in those times, is now considered art in hindsight, like pottery. For art to survive it is necessary that it keeps getting transferred to the upcoming cohort. Imagination is an important ingredient of art. In schools, children can get enough exposure towards various art forms. It would allow a child to not only express themselves, but to also imagine a world beyond what exists. It is crucial that people are taught about art at an early age, the uncorrupt mind acts as a perfect canvass for all the creativity and imagination. Everything we see around is because someone imagined it.

The need at schools

The only way to do this successfully is to not start marking children for their creation. Art is not something to be rated and competed against, it would only deter children from pursuing it at a higher age. Schools must understand that children need some time just to imagine and create something without the fear of being derided. It’s also important to recognize which art form gets a child the most excited. We would have no Shakespeare and Mozart if they both were forced to paint. Every child needs enough exposure towards various art form, enough appreciation and enough support from the schools to keep the human mind inquisitive enough, for without that we would have perished long time back!

The intrinsic pleasures and stimulation of the art experience do more than sweeten an individual’s life — They “can connect people more deeply to the world and open them to new ways of seeing,” creating the foundation to forge social bonds and community cohesion.

This is a teaser of one of the sections from a book that my friend has written. The book is called 27 Broken Footprints and the section is called : Like Me, You are – our fictional reality

The Chapter — Like Me, You are – Our Fictional Reality

Character-Her
She is young, ambitious, thoughtful. She is borderline feminist, not too vocal about her views. She writes about what she feels for strongly though. Her thought process on how she understands the patriarchal society around her is laid bare to the readers.  Then something terrible happens to her. And her thoughts change. She writes about that too.

Things you should look our for
Her thoughts followed closely by her articles.
The lizards.
The footnotes, yes please pay special attention to them.
The lizards.
Her last article.

If you have any questions/queries then please leave a comment below and she will get back to you. Her book is called 27 Broken Footprints and it comes out next month.

The difference between an artist and a common man is that the former tries finding a sense even in the seemingly nonsensical things!

I have a passion for reading philosophy. In order to gain deep understanding, I normally try to read the work of  different writers. I have been  intrigued by the works of Aldous Huxley, J Krishnamurti, Confucius, etc. It was during the last week that I came across perhaps the greatest philosophy ever written, the Bhagavad Gita.  It is a 700-verse scripture that is part of the Hindu epic Mahabharata. This scripture contains a conversation between Pandava prince Arjuna and his guide Lord Krishna on a variety of theological and philosophical issues.

Some of the great philosophers and famous personalities have enjoyed uncovering the intricate details laid out in the words of this book.

Here’s what they had to say:

“When I read the Bhagavad-Gita and reflect about how God created this universe everything else seems so superfluous.” ~ Albert Einstein

“The Bhagavad-Gita is the most systematic statement of spiritual evolution of endowing value to mankind. It is one of the most clear and comprehensive summaries of perennial philosophy ever revealed; hence its enduring value is subject not only to India but to all of humanity.” ~ Aldous Huxley

“When doubts haunt me, when disappointments stare me in the face, and I see not one ray of hope on the horizon, I turn to Bhagavad-Gita and find a verse to comfort me; and I immediately begin to smile in the midst of overwhelming sorrow. Those who meditate on the Gita will derive fresh joy and new meanings from it every day.”
~ Mahatma Gandhi

“The secret of karma yoga which is to perform actions without any fruitive desires is taught by Lord Krishna in the Bhagavad-Gita.” ~ Vivekananda

There have been numerous comments made by the great personalities. After reading these comments I thought that there must be something unique about this scripture. Gita links religion and philosophy and though I am not a religious person, I thought I should give it a reading considering that so many great philosophers have quoted it as the highest philosophical work. So here I started reading Gita two weeks back. I must say I  came across some of the things that made absolute sense. I have developed a liking for this scripture.

My first encounter with Gita goes back to the year 1997, when I was only 7 years old. At that time my school’s director used to stay near our house. I was supposed to attend moral classes at his place on every weekend. These classes involved nothing but recitation of the Sanskrit Slokas written in the Gita. So I was attending a Gita-chanting class. I could never make out the meaning of what was written there since I didn’t know Sanskrit. Needless to say, I was never bothered in asking the meaning from anyone. By the age of 12, I had developed a very good pronunciation in chanting these Sanskrit words and I had memorized half of the book, without understanding a single word! Yes, not even a single word!  This continued for two more years and then the 14 year old tried to convince his parents that they had tried to torture a 7 year old by sending him to these classes. Actually I wanted to put it in this way, but then I would have received a tight slap. So I told them that I wanted to focus more on my studies and it sounded very convincing to them. Now I did not have to waste my weekend son Gita-chanting and I could play with my friends whole day long. My contact with Gita was broken and I never missed in the coming years. It was only during two weeks back that I started turning its pages again.

There are numerous interpretations of Gita available in  the market. I have chosen a different way to enjoy its philosophy. I have studied Sanskrit in my school for 4 years and I have a  decent knowledge about the meanings of Sanskrit words. I have arranged for a Gita book that simply contains the Slokas and below every Sloka the meaning of the appearing words is mentioned. It’s just like a dictionary explaining the meaning of those words and the reader is free to make his own interpretations. I have found some of the Slokas to be very consuming. Sometimes I make my interpretation withing few minutes while some of the Slokas take my whole day.

I believe Gita is to be read as it is.

When you are reading it on your own, you will find yourself making your own philosophies and comprehending the text in a way that is best suitable for you. I shall be sharing the knowledge that I have gained soon with you people. (See, I am asking you to read my interpretation, such a hypocrite I am 😀 ). I  want to discuss the underlying meaning behind those texts so that we all can make a progress towards our spiritual journey.  Keep checking this space 🙂 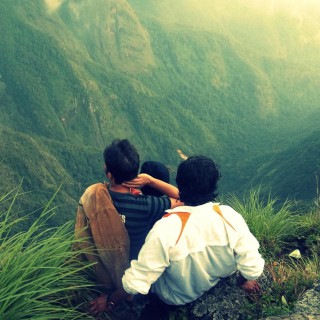